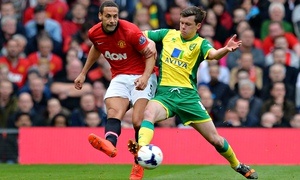 Rio Ferdinand is seriously considering a move to Queens Park Rangers, with the 35-year-old a free agent after being released by Manchester United.

Ferdinand is attracted to working again under Harry Redknapp, who gave him his senior debut in 1996 when the QPR manager was in charge of West HamUnited. The central defender, who spent 12 years at Old Trafford following his record £30m transfer from Leeds United in the summer of 2002, is a huge admirer of Redknapp, considering him a mentor during the formative years of his highly successful career.

Ferdinand has learned to manage the back problem that threatened to force him into early retirement a couple of seasons ago and is minded to play on at the highest level should the right opportunity present itself, saying recently: “I’m feeling fit and healthy,ready for a new challenge, and looking forward to whatever the future holds for me.”

With QPR once more in the Premier League after Saturday’s 1-0 Championship play-off final victoryagainst Derby County, and the Peckham-born defender keen to relocate back to the capital with his family, the west London club could prove ideal.

Redknapp believes Ferdinand would be a key asset in the challenge of ensuring QPR are not relegated straight back down. The club did so under his management at the end of the 2012-13 campaign, though the 67-year-old had taken over that season from the sacked Mark Hughes, who handed over ateam that was in bottom place after 13 games, seven points from safety.{Guardian}